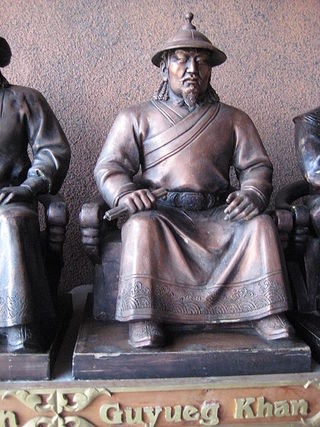 One of the great editors of our time, Lewis Lapham, features the impact of the Mongol Empire on Europe in the latest edition of Lapham's Quarterly.

The news of the Mongol invasion of Russia, Hungary and Poland caused fear and horror in Europe, at the court of Henry III. Only the Holy Roman Emperor taunted the Mongols. But Innocent IV, Pope in Rome, sent emissaries to see if the Mongols could be converted to the Church of Rome, for they practiced an Eastern form of Christianisty. His envoys had a double assignment, to inform the Pope on Mongol methods, tactics and readiness for war.

The emissary that he sent was John of Plano Carpini, a Franciscan who attended the coronation of Guyug Khan, grandson of Chinggis Khan.

In a standalone work, I tell the backstory of how Guyug Khan came to the throne, a usurper, against the wishes of his father who was Supreme Khan before him. He was a weak ruler, surrounded by sycophants, and how his spending was plunging the empire into bankrupty.

This is a fascinating story as Guyug was rumored to have been murdered, and the throne passed from the house of Chinggis Khan's named successor to the son of the most remarkable woman of her age. This was the result of a plot by the Khan of Russia and Queen Sorghagtani, to keep the empire from ruin and war. According to the Papal Envoy John of Plano Carpini, who brought word back to the Pope.

Stay tuned for my new original audiobook. I am creating a Newsletter. The audiobook will be free to all readers who sign up for the newsletter.

To all of the students and others who attended my virtual talk on Batu Khan for the American Center for Mongolian Studies, I am creating a new Facebook page dedicated to my Silk Road Series where readers will be able to contact me. All those who requested to be friends will be contacted with the new information. I have not forgotten you. I did not want the Silk Road Series to be included in a personal page.

For those doing papers, the essay on the landing page of this website contains the backstory of trade and the importance of the Mongol Empire in opening the way across the world. The link to the virtual talk, also about trade and the Mongol Empire, is on the Order Batu Khan page in the left-hand menu. The bibliography of the Batu Khan book is authoritative and has citations.