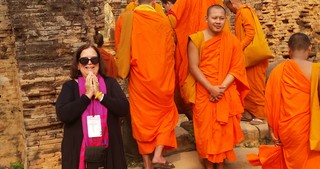 Diane is a Florida born-and-raised author/scholar. In 2010, she published Tibet Unconquered, a groundbreaking work on China and Tibet, with an introduction by Robert Thurman, the foremost scholar in the U. S. on Tibetan Buddhism. Diane was invited to give the Bishop White Lecture at the Royal Ontario Museum on the occasion of the publication of this book. The room sold out in two weeks.

In February of 2018, Diane did a reading from her book Civilizing the Khan: The Man Who Saved China  the 12th ANNUAL INTERNATIONAL MONGOLIAN STUDIES CONFERENCE, sponsored by the Mongolian Cultural Center, at the Embassy of Mongolia in Washington, D. C.

In February of 2015, Diane was featured on a panel on the Cold War and Spy Fiction at Sleuthfest, the annual event of the Florida Branch of the Mystery Writers of America. The podcast with the map is available on the Events page of this website. The subject is the Cold War in Asia and China's view of its international relations, as relates to Tibet and Xinjiang, its major minority regions where human rights abuses have taken place for decades.

Wolff is the author of two books and numerous articles on Chinese culture and language. Her previous work on Chinese calligraphy won an American Library Association Most Notable Book Award in the year of its publication.

Diane has an interdisciplinary degree in East Asian Languages and Cultures from Columbia University, with a special emphasis on Chinese History (and a minor in Japanese History).

She has done post-graduate work at Columbia University and the University of California at Berkeley and was tutored in Japanese at the Stanford Inter-University Center in Tokyo. She has traveled widely in the Far East.

Her areas of expertise include visual arts, film, architecture, cuisine, design and textiles/fashion, philosophy and intellectual history, history of Buddhism,

She lived in Tokyo for a year where she studied Japanese language and pursued independent study in art, film, theater, architecture, culture, furniture, design, food and philosophy. Her mentor and guide in getting to know Japanese culture was the great film critic, Donald Ritchie. Diane is fond of Kabuki and spent many afternoons going to matinees where she saw in performance the great Tamasaburo.

From 2000 to 2006, her column, focusing on the historical backdrop to current events appeared in the Orlando Sentinel and went out over the Knight Ridder wire.

In 2000-2001, she was the Associate Online Editor of sun-herald.com, the Charlotte Sun-Herald electronic edition.

An avid follower of new media and new technology, she wrote about China and the Internet in National Interest, was a contributor to the online news service China News Digest, and has reviewed Chinese and Japanese language learning software for Multi-lingual: The Magazine for Language Technology.

In the eighties, Diane was involved in cultural diplomacy with the Foreign Ministry of the People’s Republic of China. She was a member of then Mayor Dianne Feinstein’s Cultural Delegation from San Francisco to the sister city of Shanghai where she worked on arts exchange in music, painting and dance. In the mid-1990s, she was the West Coast organizer for a group of professional women from China who were touring the United States.

Diane was an associate producer on for television, working on the Sunday Magazine Show of the ABC affiliate, KRON-TV where she reported on the arts. She has also worked in radio, appearing on shows in New York, San Francisco, and the West Coast of Florida.

A winner of a Fulbright fellowship to study advanced Chinese while at Columbia, she is a member of the Author's Guild, the American Society of Authors and Journalists, the Asia Society and the Association for Asian Studies. She lives on the West Coast of Florida.