Happy Holidays to All!
Welcome to the Silk Road!

News From The Silk Road
By Author Diane Wolff 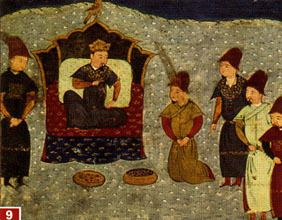 Batu Khan on his throne

FOR THE CLASSROOM FOR CLASSES IN GLOBAL HISTORY!

The First Book in My Silk Road Series:

The Khan's Mistake: The Fight for the Succession 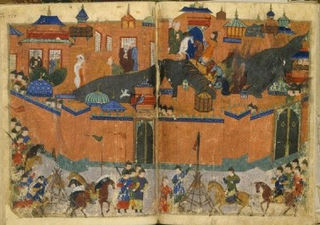 Hulegu Khan and the Siege of Baghdad, 1258

My father taught me a love of history for it is basically a love of stories. I am inspired by the novelist of Tibet Eliot Pattison, who says that well-written historical fiction brings history alive, if it is faithful to the truth. I used to complain to my father that my teachers made history boring, a sequence of the names of places and dates. My dad told me that he told me the stories.

It is difficult to understand the present unless one understands how we got to where we are. We are in the second period of global history.

I write about the Mongol Empire as the first period of global history, a vast story with many brilliant and exciting characters. History teaches us about the constants in human nature, some glorious and some demonic, disappointing and dark. My theme is as old as history itself: skulduggery in high places.

I have been researching and writing about the Heirs of Chinggis Khan for twenty years. You might call me an archaeologist of the Silk Road, digging out the story of a vast empire from a vast literature.

(Chinggis is the modernized spelling of Genghis, the Persian spelling. This is the pronunciation in the Mongolian language.)

The Mongols are famous for war, but their stories are as about war and strategy, but after the conquests, they are about trade, the circulatory system of the medieval period, when the old structures of finance and banking fell, and the modern world was born.

To readers of my book Batu, Khan of the Golden Horde: The Mongol Khans Conquer Russia and all those taking a class in Global History or teaching a class:

The maps and illustrations are posted on Batu Khan page, as is a podcast, considered by me to be a demo, as it was created on a deadline. I was invited to submit this book for the Buchanan Prize, and at press time, there was no time to include the illustrations in the book. Color printing is prohibitively expensive, so I thought the student would like the brilliant colors for works of art from important collections online.

I wrote the five books in the Silk Road Series: The Heirs of Chinggis Khan as narrative history.

I began by writing the story of the Mongol Empire as historical fiction, in two books, one about Chinggis Khan and one about Khubilai Khan. I was taken as a client by a literary agent who suggested that I tell the whole story of the conquest. It was my first time writing fiction, I was told that the book had to be a certain length, a length that readers preferred, and I was walking around in the skin of a man known as The Conqueror.

When I turned the book in to the agent, he told me that I forgot to put in the battle scenes. And so I had a baptism by fire. I spent six months writing nothing but battle scenes. I regard myself as a woman of peace, and I became a poet of war.

The story was so vast and there were so many characters that I could not fit it into two books. The best way to tell the story was in short books, each focusing on an important character.

I chose to tell the story as narrative history, a genre that has become popular in our time. I abandoned the novels and exiled them to the Siberia of my hard drive.

Very recently, a professor of Central Asian Studies told me that he though assigning a novel to students might engage their interest. I decided to create an entirely new book, called Chinggis Khan's Mistake: The Fight for the Succession.

I decided to focus on a theme, as this seemed a way to follow one particlar story line, creating a short book for modern attention spans.

Chinggis Khan's Mistake refers to the fact that the Supreme Khan performed many great tasks and deeds, but his one mistake was that he failed to provide for an orderly succession to the throne.

This led to political intrigues, a coup d'etat and generations of wars between the khans who were his descendants.

These stories have been lost to the West. Yet they are important as background to our times: Chinggis Khan's empire changed the relationship between Europe, Asia and the Muslim world during the first period of global history.

The new book is posted on Amazon Vella, a new feature for serialized stories. The first three chapters are free to readers. After that, there is a small subscription fee for the rest of the book.

I have always wanted to publish a serialized novel. I have been inspired by Charles Dickens and Mark Twain. (My book could be assigned for a class in global history for high school students and for undergraduates. I think this is a great way of engaging students.) I will be posting the second ten chapters beginning in May, 2022. Read a sample here.

If you sign up for this newsletter, I will send links to more material, including podcasts, read by your author, and maps and illustrations. This is exclusive content.

I hope you enjoy the stories as much as I have.

Readers of all ages, get on your ponies and ride.

You can reach me on Twitter @wuwolff or by clicking on the email button on this site.

Marco Polo's World
Why was Marco Polo called a liar by the citizens of Venice when he returned after his stay of almost two decades at the court of Khubilai Khan?
Taifun: Khubilai Khan Invades Japan by Sea
Why would a man born to the horse take to the sea? Why did the boy Shogun refuse to submit to the man who unified China? Why did Khubilai Khan become obsessed with forcing the submission of Japan?
An Offer He Couldn't Refuse: The Man Who Saved China