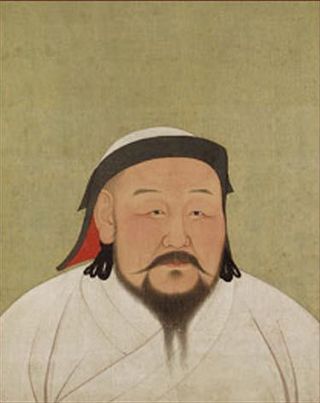 Khubilai Khan
Death to the Usurper

This is a podcast, a reading of the prequel to Taifun: Khubilai Khan Invades Japan by Sea. It is about the plot to take the throne. 30 minutes. 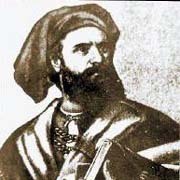 Map of the Mongol Invasions of Japan

Great for students. A video game preview summarizes pirate activity of Japanese wako plundering the coast of Korea. The Mongols have recently accepted the King of Korea as a vassal, so Korea builds the 1000 war junks for the invasion and Korean sailors pilot the ships. Khubilai Khan is determined that Japan will submit. He is the Son of Heaven. He will be the supreme political power in the region. He will not accept the defiance of the boy shogun. Shows how these waters were strategic in the time of Khubilai Khan.

Why had a man born to the horse taken to the sea? This is the story told in Taifun: Khubilai Khan Invades Japan by Sea.

Khubilai Khan was the grandson of Chinggis Khan, born in the steppes beyond the Great Wall in the year that his grandfather conquered North China, 1215.

From being a minor prince in a minor branch of the imperial family. he rose to occupy the Dragon Throne of China. He unified China for the first time in four hundred years. His court was international, modelled on the court of the Tang Dynasty, China's Golden Age. He even had a European at court, Marco Polo, who spoke the languages of the court and was Khubilai Khan's confidante and spy.

Marco Polo was aware of intrigues at the court of the Supreme Khan and was a friend of the Heir Apparent, Khubilai Khan's son Jinggim. Both opposed the Emperor's obsession with Japan's submission.

Khubilai had taken the advice of Chinggis Khan's Chinese chancellor and learned from the Confucians whom he organized into an informal court. According to the Chinese ideal, Khubilai wished to rule in benevolence, modeling his rule on the sage-kings from the Chinese classics. He modeled himself on the greatest of Chinese emperors, Taizung of the Tang Dynasty.

The Tang was China's Golden Age and the court of the emperor was rich and it was cosmopolitan and international. The surrounding nations submitted to China as vassal states. Khubilai Khan felt that to be a true Chinese emperor, the states that had submitted to the Tang had to submit to him.

He wanted Japan submit to acknowledge him as the Son of Heaven. Japan was one of the few countries that the Mongol Empire encountered that had a strong military tradition. In this case, Khubilai ran up against the samurai tradition of highly skilled warriors loyal to a leader. The the boy Shogun Tokimune, himself a famous archer and not only that, a practitioner of Zen Buddhism steepes in the art of meditation and also of the refined art of calligraphy, refused to submit and rebuffed the embassies sent by the Supreme Khan. Tokimune called Khubilai Khan a "robber baron of the North." To him, the Son of Heaven sat on the throne of Southern Song. That is, until Khubilai Khan defeated the Southern Song and reunited China.

Marco Polo tried to convince the Supreme Khan that this was a folly. Ahmad, the Minister of the Treasury, a Muslim from Central Asia, tried to persuade him that the gigantic projects of civil engineering, were bankrupting the treasury. They needed reveniuand the invasion required the building of 1000 ships in Korea, a vastly expensive undertaking. Khubilai was determined that he would be as great as the Tang Emperor.

Khubilai failed, but that was not the end of it. A few years later, fresh envoys were sent with Orders of Submission and a fresh rebuke came from the Shogun at Kamakura. The fleet left port and entered Japanese waters. Again the military attacks were unsuccessful, the boats put out to sea to ride out a storm, and again a taifun hit.

When the Mongol fleet went down, the myth of the "kamikaze", the Divine Wind was born. The Sun Goddess protected the Land of the Rising Sun from its enemies.

Khubilai became King Lear, a man undone. It is a study in the greatest of Buddhist teachings, that of impermanence. This was the great lesson. Glory turned to despair. The Supreme Khan drowned himself in alcohol, and grew depressed and obese. At length, Marco Polo returned to Venice. All of Khubilai's old friends died or left court. Soon, he died.

The myth of the Divine Wind endured in the minds of the Japanese, even down to World War II. The suicide pilots who attacked Pearl Harbor were called "kamikaze."

This story is told in the histories from the point of view of the battles, but the personal story of Khubilai has been left out. Here, followig the work and the research of Morris Rossabi, the biographer of Khubilai Khan, and the narrative of Marco Polo, for the first time, Diane Wolff reveals the story behind the story.

Khubilai Khan's invasion of Japan has been documented by present-day marine archaeologists who have found the hulls of ships that sailed from Korea in the fourteenth century. They have discovered metal artifacts from these vessels. A museum stands on one of the islands of Japan, in memory of the failed invasions.

This is a story from history, but it resonates with meaning down to the present day. The maritime history, from pirates to invasions, is one that has been explored only at a distance. This is the story, up close and personal.

Diane Wolff's work is a powerful reminder that those who want to see the future must first understand the past.  Taifun is the prelude to the modern world.  Although set nearly eight centuries ago, her book reveals how modern Asia developed and in particular how the complicated relationship between China and Japan was shaped.  Her unique analysis of Khubilai Khan reveals him as a skilled strategist and tactician of a kind so rare in the past but sorely missing in the modern world.

Genghis Khan and The Making of the Modern World