A Talk for the American Center for Mongolian Studies 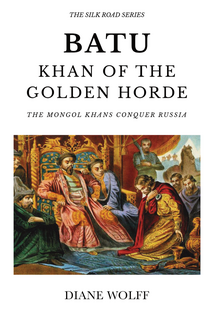 On November 13th at 8 A. M. EST, I will give a live talk about Batu Khan for the Virtual Speaker series of the American Center for Mongolian Studies in Ulan Batur.

I am going to explore Batu Khan's character, the man who became a kingmaker, rather than Supreme Khan.

What led Batu Khan to create a plan with the Princess Sorghagtani to change the branch of the imperial house of the Mongol Empire? This was a momentous strategy that ultimately saved Europe from a Mongol invasion. Why was he getting fabulously wealthy? Why did he choose not to be Supreme Khan>

Tune in and find out. This is for the launch of my new book, Batu, Khan of the Golden Horde: The Mongol Khans Conquer Russia.

Maps and illustrations, click on the menu on the Order Batu Khan, There is also a mini-podcast of me reading an introduction not covered in the book.

The video will be available on ACMS YouTube channel. I will post the link after the talk.

Thanks very much to the ACMS for the invitation. I am hoping to tell a fabulous story, a little entertainment in the time of the healthcare emergency.

Going to the Horde: The Effect of the Mongol Invasion on Russia

The invasion army was commanded by Batu Khan, a grandson of Genghis Khan. The Mongol Army was the greatest fighting force of the medieval world. In my new book, I examine the strategy and tactics that would have come into play if the Mongols had decided to conquer Europe.

The first invasion force was small, only twenty thousand. It was an experiment, an expeditionary force. The great general had spies, Venetian spies, who informed him of conditions in Russia. (They also provided intelligence on conditions in Europe that caused Subudei to plan the invasion of Europe with Batu in command of one wing of the army.)

Europe was divided and the Europeans were in blissful ignorance about the Mongols and their potential danger. Even when warned by King Bela of Hungary about the approaching menace, the Europeans ignored the warnings. The Pope and the Holy Roman Empire were at war. They were preoccupied, too busy killing each other to face an external threat. It is a very good story.
Read More
Be the first to comment

Marco Polo's World
Why was Marco Polo called a liar by the citizens of Venice when he returned after his stay of almost two decades at the court of Khubilai Khan?
Taifun: Khubilai Khan Invades Japan by Sea
Why would a man born to the horse take to the sea? Why did the boy Shogun refuse to submit to the man who unified China? Why did Khubilai Khan become obsessed with forcing the submission of Japan?
Civilizing the Khan: The Man Who Saved China