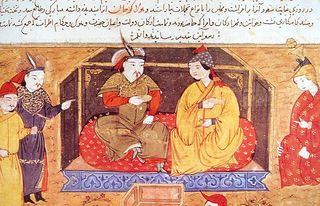 Click on the link to see maps and illustrations of Hulegu Khan and his Campaign in Iran and Iraq. He was to punish the Assassins for their attempt on Emperor Mongke's life, and he was to punish the Caliph of Baghdad for transgressions against the Mongol Empire. A great story lost to the West.

Il-Khan: Why Hulegu Khan Destroyed the Assassins and the Caliphate

The destruction of the caliphate at Baghdad was one of the great disasters visited upon the Muslim world before the coming of the West, yet it is an event that has been totally lost to Western history.

This book explores the reasons why Mongke Khan, the greatest emperor of the Mongol world after Chinggis Khan, ordered his younger brother Hulegu Khan to take 100,000 troops and cross the Roof of the World. It was a secret that Hulegu had a battle plan for the Middle East. He was to go to war against the Order of the Assassins and the Caliph at Baghdad, the two centers of power of the Muslim world, Shia and Sunni. Then he was to fight in Syria and Egypt and reduce the power structure there to Mongol rule. It was the time of the Crusades, and Christians were fighting Muslims for control of the Holy Land.  Hulegu offered the Christians an alliance against the Muslims, but his offer was rejected. This book explains the reasons why the Christian Crusader Kings lost their only chance of beating the Saracens.

Marco Polo's World
Why was Marco Polo called a liar by the citizens of Venice when he returned after his stay of almost two decades at the court of Khubilai Khan?
Taifun: Khubilai Khan Invades Japan by Sea
Why would a man born to the horse take to the sea? Why did the boy Shogun refuse to submit to the man who unified China? Why did Khubilai Khan become obsessed with forcing the submission of Japan?
An Offer He Couldn't Refuse: The Man Who Saved China